Developer Conference 2014 is finally over. The last two weeks were damn busy for me. Just a week before the conference I went to FOSDEM and it wasn’t just attending. I organized a bus with 40 hackers between Brno and Brussels, accommodation for 6 Fedora people, and pretty much the whole Fedora booth at FOSDEM + producing 400 t-shirts for CentOS guys and bringing a lot of other stuff from Brno for various parties. When I returned I didn’t have time to rest because DevConf.cz was just a few days away. This in a combination with very little sleep meant that I had a complete physical meltdown on Wednesday. Not only was I dead tired, but I also got some flu/cold. Then I just focused on surviving till DevConf.cz because as the main organizer I just couldn’t simply back off. So I just worked and slept and removed all stuffing between it and it worked 🙂

We put DevConf.cz just one week after FOSDEM which as I described above almost killed me. But it also had a lot of benefits. Most importantly, people from overseas could come for both events and spend the week between on internal Red Hat meetings in Brno. And a lot of people did. I wondered how many attendees would come this year. Last year, it was around 700, but quite a lot of publicity on the Internet and people mentioning the conference indicated it could be much more this year which could be a problem because the venue is not very large and half of the campus is under reconstruction.

And we did have a lot of attendees. The number from DevConf.cz 2013 was exceeded within two hours and the total number of attendees for the first day was nearly 900. The total number of unique attendees for all three days was around 1000 which was a significant increase from the last year. Especially on Friday, we were hitting the capacity of the venue. Several talks were completely packed. For example the ones about Docker and OSTree where you couldn’t even get into the room if you came too late. I didn’t attend many talks and when I found time to attend one I was usually called back by an urgent problem. Nevertheless, the general feedback I heard from other people was that the talks had even better quality than last year. I really liked the Fedora Day which was the third day of the conference. This attracted a lot of people from the Fedora community and I could actually meet maybe more Fedora contributors at DevConf.cz than at Flock.

I can’t rate DevConf.cz because as the main organizer I’m biased, but from the organizer’s perspective the event went quite smoothly which was mainly due to tireless help of dozens of volunteers without whom the event wouldn’t be possible and I thank them for that.

And DevConf.cz 2015? I’m already thinking about that. We improve the event incrementally based on feedback from attendees to make the event better every year. Some of the proposed changes such as making the talk slots shorter to have longer breaks worked very well and we’ve already gathered new ideas for the next year. We also will have to assess the venue. The cooperation with the university is almost ideal, the location is also very good, but if we want to accommodate even more attendees next year we’ll have to have more space. The reconstruction will be finished in summer and then there should be mid-sized rooms for smaller talk or workshop tracks available. We will see. The only significantly larger venue in Brno is The Brno Exhibition Area which would be a huge cost jump up and I still find university campuses more appropriate for developer’s events.

P.S. Videos of talks from the three main tracks will be online within a few weeks. We’re working on it. 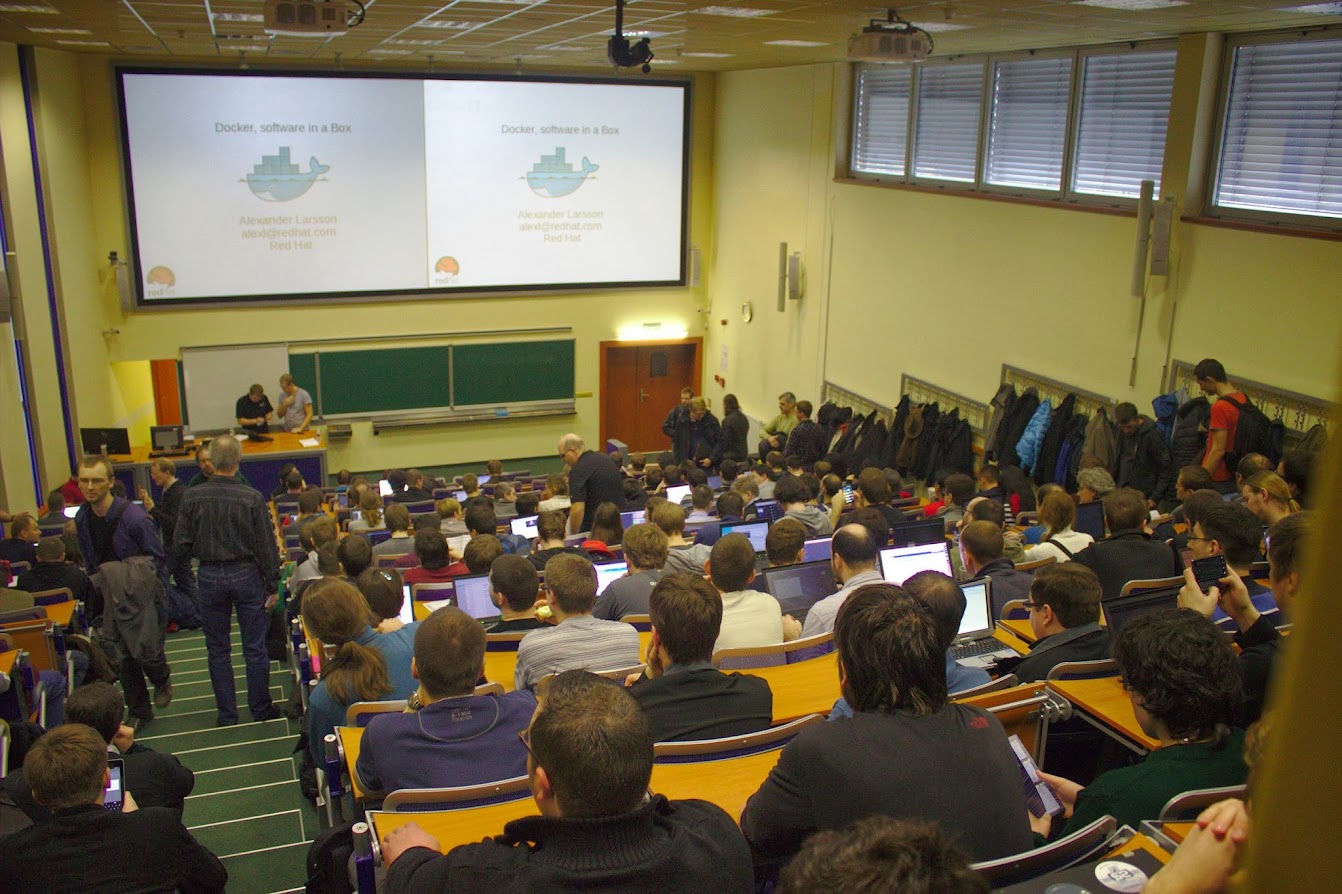