Although I was still recovering from bronchitis and the English weather was not helping much, I really enjoyed this year’s GUADEC. Last 3 GUADECs suffered a bit from lower attendance, so it was great to see that the conference is bouncing back and the attendance is getting close to 300 again.

What I value the most about GUADEC are hallway conversations. A concrete outcome of it is that we’re currently working with Endless people on getting LibreOffice to Flathub. In the process of it we’d like to improve the LibreOffice flatpak, so that it will be a full replacement for the traditional version in packages: having Java available, having spell-checking dictionaries available etc.

I also spent quite a lot of time with the Engagement team because they’re trying to build local GNOME communities and also make improvements in their budgeting. This is something I spent several years working on in the Fedora Project and we have built robust systems for it there. The GNOME community can get an inspiration from it or even reuse it. That’s why I’d like to be active in the Engagement team at least a bit to help bring those things into life.

The last two weeks were pretty busy for me because I travelled to two of my most favourite conferences – Flock and GUADEC.

Flock was held in Krakow this year, so the traveling was a sort of easy for me. Krakow is just 350 km from Brno which is about 3.5 hours by car. The conference was again organized in the hotel where almost everyone stayed. The same setup was already in Rochester last year and people appreciated it. It’s very convenient. You don’t have to travel to the venue, you can sneak out to have a nap, which is super useful if you’re fighting jet lag, and you can use hotel facilities such as a gym or swimming pool. 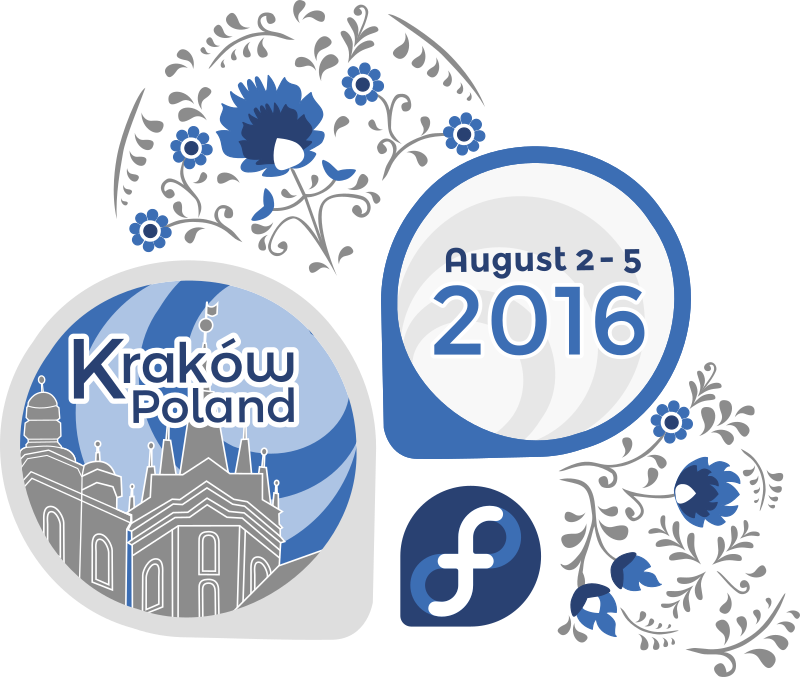 I had one talk and one hackfest at Flock. The talk was about Fedora SWAG. I’m still quite a lot involved in SWAG production for the EMEA region and it was a pleasure to state that the things have improved since the last year and a lot of ideas we had at Flock in Rochester actually got implemented.
The hackfest I organized was about writing AppStream metadata for application add-ons. I started the initiative in December and since then dozens of add-ons appeared in GNOME Software because they got AppStream metadata. The hackfest was partly a workshop because it took me quite a while to explain everyone what to do to make an add-on appear in the default app catalog in Fedora. I also learned new things. Richard Hughes who is very involved in upstream AppStream and works on GNOME Software participated and I, for example, learned that the way I had added keywords in metadata XML files was wrong. And Richard learned that I was doing it wrong because it was not documented anywhere.

I also attended many other talks. Matthew Miller’s keynote on the state of Fedora Project was very informative. I’m happy to see Fedora grow and I’m especially happy that our team plays a big part in it (Workstation makes ~80% of all ISO downloads). My boss Christian Schaller had a talk on Workstation which was pretty interesting, but because my team is deeply involved in many of the Workstation initiatives there was not much new to me. I also enjoyed talk by Jonathan Dieter who has run Fedora on 100+ computers in a high school in Lebanon and it was very interesting to listen to what it takes to use Fedora in such a deployment. Jonathan also noted that he hasn’t had a single major issue with Fedora in the last 3-4 years. Improved quality of Fedora was a theme that repeated in many other talks.
What was the main topic of the conference was modularity. Langdon presented a progress of this initiative. I must say I knew very little about it and I was quite surprised that the planned solution is built around RPM rather around increasingly popular containers.
I also met Pawel Hajdan of the Google Chrome team. Conversations with him very very informative and interesting for other Red Hat desktop team members, too. We discussed AppStream metadata for Chromium, Chromium for Flatpak, Chrome on RHEL etc.

Just a couple of days after I returned home from Flock I travelled to GUADEC which is the primary conference for GNOME users and developers. I didn’t have any talk or workshop, but a couple of my reports spoke there. This time the traveling was a bit more difficult. We went by train, had to take 6 of them, and traveled 1000 km. But the whole Brno crew made it to Karlsruhe sound and safe. 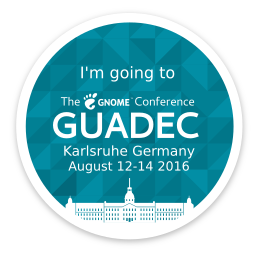 There were many talks by Endless people. I’m really happy that Endless increases its investment in GNOME. It’s always better to have several major corporate contributors. Endless also proves that it’s possible to build a different shell on the top of GNOME, make your own UX story and still use most of the GNOME components.

I really enjoyed Owen Taylor’s talk on Fedora Atomic Workstation. Read-only OS, all apps in containers, development environment separated from the system… tt will be a radical change, but with a lot of potential benefits. I also like that Owen already has a clear idea about it and an already working prototype.

On Monday, I attended a Flatpak BoF. I expected it’d be mostly about portals, but portals were mentioned just briefly. Most of the discussion was about some centralized Flatpak repository. Someone suggested something called FlatHub which would be a place for Flatpak repositories where developers can build and distribute their apps, something like Copr for Flatpak. This can’t be exposed to average users though. We want to avoid a mess of 10 builds of GIMP without guaranteed quality. So there needs to be something called FlatStore where only approved and trusted developers can distribute their apps. So only GIMP developers themselves would be able to distribute GIMP there. There were many practical obstacles discussed. Should we build everything on store servers or allow developers upload binaries (building some desktop apps could be very resource hungry), who should run such a store (GNOME Foundation, FreeDesktop.org, a company?), how distributions will accept something that is built outside their control etc.

I enjoyed all days of both conferences. Very well organized, but still with the “for contributors by contributors” feeling. GUADEC 2017 will be in Manchester. Where Flock 2017 is going to be held is yet to be announced. The only certainty is that it will be in North America, so much more travelling for me next year, but I hope to visit both again.

Tomorrow, I’m traveling to GUADEC 2015 which is held in Göteborg, Sweden. It’s going to be my 4th GUADEC and the location is kinda special to me. When I was a kid and was a lot into football, my most favorite goalkeeper was Thomas Ravelli who played for IFK Göteborg which thus became my favorite foreign football club. I was in Göteborg five years ago and it was indeed a beautiful city, but I didn’t manage to purchase an IFK jersey. So hopefully, I’ll have an opportunity this time.

I’m also very much looking forward to the weather because the weather forecast for Göteborg is 18-20C while temperatures in Brno are getting back over 35C. We’re having the hottest summer all my family relatives remember. We might get more than 30 tropical days (30C and more) this year, so the cold Swedish climate will be a nice retreat from the heat.

But I’m primarily looking forward to the conference itself. The schedule doesn’t look too busy, but I’ve still found a lot of interesting talks and some hard collisions of areas of my interest. I will surely attend talks by Caolan and Stephan from my team. And I’m glad there are actually quite a few talks on LibreOffice.

BTW I’ve also created a group chat in Telegram for the conference (you can join it by following http://bit.ly/guadec15tg). At this year’s Akademy, they used it as the official means of communication and they found it very useful and popular. Open source conferences traditionally use IRC channels, but at conferences you get disconnected and connected very often and that’s not where IRC excels. Moreover a group chat in Telegram can be hooked with an IRC channel via a bot. I most likely won’t have time to set up the bot, but if someone wants to volunteer… 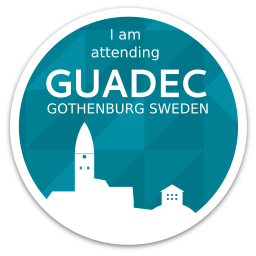 The annual conference for Fedora contributors – Flock – is very close after GUADEC this year. I won’t even have time to travel back home, so I’m flying to Rochester, NY directly from Göteborg. I will have two talks there (both on the same day, it actually be the first time in my life I have two talks on the same day). One is on the long-awaited transition from FAmSCo to FOSCo/CommOps and the other on Fedora SWAG. I’d like to conduct it rather as a discussion than a typical talk because both topics have a lot to discuss.

I’ve also created a group chat in Telegram for Flock. To join, just follow http://bit.ly/flock15tg. I, Kushal Das, and Dennis Gilmore used it to communicate at FUDCon APAC and found it very useful, so why not to include more people?

After Flock, I’m taking a week off to travel around the East Coast to see old friends, do some shopping etc. I also hope finally go to Quebec City which I’ve always wanted to visit. 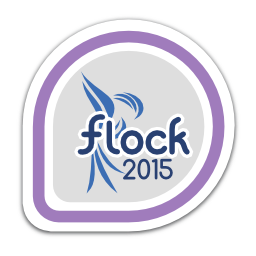 I’m going to GUADEC 2014 in Strasbourg! Last year, I was one of the organizers and I planned to enjoy this year’s GUADEC just as an ordinary attendee. But I assigned myself at least some job. I’ll be covering the conference for Fedora Magazine.

I’m looking forward to meeting other Fedora guys there!

A conference duathlon is what I’m going to experience in the next two weeks. I’m one of the organizers of GUADEC 2013, a GNOME conference which is held in our beloved city of Brno. And it’s not an easy one to organize. You have to have a legal entity to sell stuff (tickets, t-shirts, lunch tickets,…), set an online paygate (this was a particularly tricky one), invoice sponsors, communicate with them to meet their expectations, sponsor chosen community members, organize several social events, produce tons of swag etc. etc. etc. So no wonder the whole GUADEC 2013 team has been busy in the last couple of weeks and I maintain all my Fedora duties on a basic level (still responsive, but can’t do anything extra).

GUADEC starts in two days and will keep me busy until Aug 8th when I have to quickly pack my stuff and leave for the Prague airport to fly to Flock 2013 which starts on the 9th. A request to submit slides of my Flock talk by Aug 1st was the last nail in the coffin of my sanity and free time. I usually work on them around 11pm when I finally catch my breach. But I’m apologizing to Flock organizers in advance: Sorry, I won’t be able to submit them in the final version.

Besides being really busy, I’m looking forward to Flock. Although all FAmSCo won’t meet there in person as I planned, 4 members will be there, so we still can discuss a lot. I would like to also include other ambassadors in a broader discussion about Fedora Ambassadors project. One of the projects I want to start working when I get less busy are Fedora fliers. I still hope I’ll be able to organize some session to get all parties (devels, marketing, designers) together and spin it off.